The Fountain of Youth 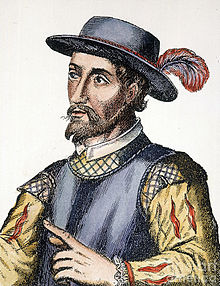 “To sixteenth century Europeans America was a land of marvels, a place where nothing was impossible. Some even believed that there they might discover a way to regain their lost youth.
Ponce de León was a Spanish conquistador who came to the New World with Columbus on the explorer’s second voyage. He became the governor of the Caribbean island of Puerto Rico. The Amerindian people of Puerto Rico told de León that to the north lay a land rich in gold. This northern land, they said, also had an even more precious treasure-a fountain whose waters gave everlasting youth to all those who drank from it. In the spring of 1513 de León set off in search of the magic fountain. He landed in present day Florida and sailed all round its coast searching for the miraculous waters.
Ponce de León never found the Fountain of Youth. But he did claim Florida for Spain. In 1565 Spanish settlers founded St. Augustine there, the first permanent European settlement on the main-land of North America.”